This second article on personality archetypes within the pagan “scene” will focus on the Super Scholars: Pagan Ultra-Academics.

Often the complete opposite of the Pogan, the Super Scholar can usually be found around the fire late at night at gatherings, where they will debate and discuss every possible facet of their current area of study, while at the same time arguing about every tiny point of Pagan history – both ancient and modern. These are the people who make a beeline for Elders (actual or perceived) at gatherings, anxious to glean any information that they can, and will interject with “actually, I think you’ll find…” at least four or five times during conversations on anything remotely related to Paganism.

But how do you pick a Super-Scholar from a run-of-the-mill academic?

While for these reasons and more Super Scholars should be kept at a safe distance if you come across them, it is important to think of this: in some ways, we should feel sorry for them. These mega-academics of paganism have not actually done themselves any favours, when it comes to worship and community.

The curse of the Super Scholar is threefold: 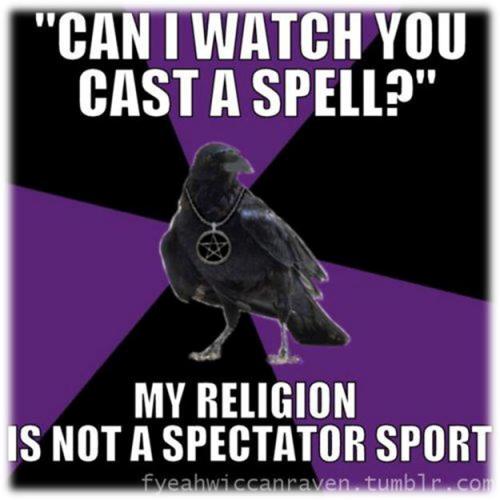 Generally, I prefer pagans who not only know their stuff to some extent, but are able to discern between the diamonds and the bollocks. But in some cases, folks overdo it. Sometimes it really is a case of knowing too much. I cannot speak for others, but I resent having my spiritual practice reduced to some sort of anthropological oddity. When all your tomes, recounts, artefacts and hearsay start affecting your ability to experience ritual and your relationship with most other pagans, it might be time to stop for a while. Shouldn’t some Mysteries remain just that?

The main reason for writing this blog post, was to post up this age-old poem that I got ages ago, a poem that has been on my mind lately. I’m not sure where my copy is, and I am not sure the verses are the same as this one that I just found on the internet…. They probably are.

I am the leader of this group
And before Me all you others stoop.
Bend thou, adore Me on your knees
For I have HPS disease!

Slowly, silently, now the moon
Lights My face with its silver shoon.
Call Me “Lady”, if you please,
For I have HPS disease!

For all you followers of the Law
Versed in ancient Celtic lore,
Tremble before My higher degrees,
For I have HPS disease!

Lions of Enoch, goats of Pan,
Your magic has but little span;
Know that I am greater than these,
For I have HPS Disease!

I am wonderful, I am good,
I am everything a Goddess should.
Kiss my lips, chest, groin and knees
For I have HPS disease.

You with mumps, diphtheria,
HIV, hysteria,
The earth will tremble when I sneeze,
For I have HPS Disease!

This poem completely rings true. Quite a few of us pagans and witches out there have met High Priestesses like this. It’s nothing I’ve suffered from, thankfully, however I’ve seen people in the past, and even some today that suffer from this disease, and to all appearances, are quite happy to suffer. Unfortunately, these disease-ridden people don’t only behave like a ‘lady’ around their own minions, but they expect everyone else to treat them the same way. At public gatherings, or private paid events, they will keep to themselves, their little coven huddled around them and following them around like little yellow chicks, chirping for attention. Nor do they enter into rituals, workshops, or lectures that people hold at said event. As I said, they keep to themselves, but attend these events to either a) Try to keep a public attendance up with other pagans, mainly to show off, or b) to recruit the gullible at said events into their magical coven of several dozen.

I have heard of and even seen the HPS have their own rituals at a public gathering too. Not attending the main ritual of the organisers, thus disrespecting the event and its organisers, the group often get ignored and thrown snarls of disgust by the other attendees, but as their members often reveal that they think themselves above all other attendees, it usually falls on deaf ears.

Some of these particular types of HPS’s are quite young, some not much older than their minions, however, ‘as they MUST know more than me, I must obey’ their followers positively adore them. As mentioned in this spot-on blog post, many have the title of ‘Lady’ in front of their elaborate names. Hence the title of the Melbourne woman, Lady Elizabeth Rose. This is a classic example. These titles are one way of letting all public, pagan or muggle, know that they have this disease. Wise people stay away, for fear of catching it, but more likely because they are just idiots. Often their 3rd degree was given to them by themselves, probably only a few months after their self-initiated 1st. This gives them hierarchy over those they are teaching, who will believe anything they say. These groups often do not last long – any kind of civil war uprising soon gives way to side-taking, and that’s when people should run for cover. It’s the ‘all about ME’ disease.

This disease is not confined to the women, men too are guilty of such things. As said in the same blog I linked above, it is often more commonly women due to the hierarchy being headed by women out of the HP and HPS. Those with the Hera Complex (alpha-female) will burrow nicely into wicca, witchcraft and paganism, when they see how much reverence is involved.

Girls – Avoid women like this. If you have strong opinions and an independent mind, you might find you argue and fight with this person if you get involved in a group with one. Even if it is not your intention, they will think you are attempting to climb the ladder and be HPS yourself, and will tell everyone else that, thus gather side-takers. Boys can avoid them too. Be modest in your witchy workings, lead without being bossy, educate those who might be too conceited and may get worse. And I don’t just mean when you are young, but all your life, even when you are old and wise…

Back to the poem, which started this rant. It’s easy to get an image in your head of the HPS described by Vivienne West when she wrote this. Personally, I think many, many more verses could be added….

I’ve been sitting on this piece, the first in a series, for a while. Today I have finally decided to publish it as a companion piece to Daracha’s post about dodgy “faeries” and their equally dodgy festivals. I was originally inspired to write this series of pieces after reading Elizabeth Barrette‘s piece “Granola Wicca: Religion for Fruits, Flakes and Nuts”, which was published in this book. I would usually rather sit on an ants nest before I recommended ANYTHING published by Llewellyn, but this article tickled my fancy.

Reading this article, you might find yourself thinking that I am elitist. That is because, to some extent, I am: after a long stretch in a number of pagan “scenes”, I have learned to be discerning. After a number of bad experiences, I am fussy about who I enter into circle with, for example.

On with the show…

Be involved with the public (or even semi-private, for that matter) pagan scene in Australia for long enough, and you will start to come across the same personalities time and time again. In my experience, these archetypes seem to “cycle” in and out of the community every five years or so. In some cases, these personality types will cause big trouble for anyone who dares to get close enough. For the sake of your sanity, here’s a manual.

Bogan pagans, or Pogans, are a distant cousin of the Redneck Pagans of the United States. There are many theories on why paganism seems to attract an unusually high number of boganesque folk, some of which I aim to unpack at a later date. The most commonly accepted belief is that this religion (or collection of religions) is generally marketed as “anything goes” religions. Hence, many folk find it as a way of finding validation that doesn’t necessarily exist elsewhere in their lives. Sadly, thanks to mass media and mass marketing of paganism (in particular, witchcraft), Pogan numbers seem to be on the rise.

Poganism is usually characterised by:

Pitting an 80’s pop icon against a dragon will never end well.

Just how do you enjoy an event with a high percentage of uber-pogans? Well, begin by avoiding arguments, for the sake of those around you. No matter how tempting it is to react like this:

We’ve already touched on dealing with unpleasant personalities at pagan events here at Galloway and Daracha. I will, however, add this: just… be nice. These people can be infuriating, noisy and opinionated, but their minds have been made up. You can waste a lot of energy if you don’t realise this. The other thing to remember is not to be nasty to people. If you have convinced yourself that you are totally correct and they are totally incorrect, you can come across just as loud, opinionated and unpleasant as the Pogan you’re arguing with. It is not your job to “educate” people. Smile, nod, and walk away if you need to. Do not waste energy trying to unpick their (mostly flawed) arguments or picking fights. Take a deep breath, endure, and then find a good friend to vent to in private later.

The fact of the matter is, there are many festivals out there that now cater for the Pogan in all of us. If you want to minimise your Pogan exposure, look to smaller, more intimate gatherings, and research the larger ones before you go. If a gathering is celebrating many items from my list above, expect a touch of Poganism.